On the 27th November 2019, a Memorandum of Understanding (MoU) was signed between MRU and UNDP at the Radisson Blu Hotel in Freetown, Sierra Leone, with a view to foster stronger regional cooperation among the MRU Member States and UNDP and to enhance the effectiveness of Member States development efforts. 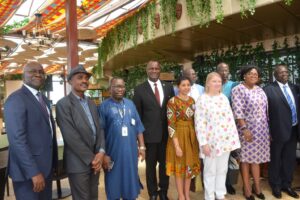 In order to operationalize the MoU, a Joint Planning workshop was held at the Boulevard Palace Hotel in Monrovia, Liberia from 17th – 19th February 2020. The objective of the workshop was to develop an action plan and budget for the implementation of the MoU, identify synergies and map-out roles and responsibilities of Member States and other key stakeholders.

In his opening speech, the UNDP Resident Representative –Liberia, Dr. Pa Lamin Beyai, who doubled as chairperson of the opening session, welcomed participants to the workshop and stated that peace and security are critical in furthering democracy and good governance within the sub region. He reiterated that environmental degradation, climate change and challenges related to good governance affect the 4 member states and that this required concerted efforts to promote peace and stability in the sub-region.

The ECOWAS Representative – Liberia, Mr. Babatunde Ajosomo also delivered a speech, noting that the MOU between MRU and UNDP is anchored on the guiding principles of the 5 Ps: PEOPLE, PROSPERITY, PLANET, PARTNERSHIP and PEACE.  He stated that the role of MRU is critical to the achievement of regional integration hence MRU needs to be strengthened especially in cross border issues. He pledged ECOWAS’s increased collaboration with the MRU.

The UN Resident Coordinator- Liberia, Mr. Kinsley Armani in his key note address, emphasized that Peace & Security in MRU Member States are critical in deepening democracy. He encouraged MRU and ECOWAS to deepen their collaboration towards the development of the sub region. He applauded the convergence of the MoU with the UN SDGs and called on MRU to reengage alongside the RC with Central Governments for coordination with Security apparatus especially in border areas.

The DSRSG – UNOWAS, Ruby Sandhu-Rojon in her speech expressed satisfaction at the UNDP-MRU partnership. She emphasized the interrelationship between peace and development. She ended by soliciting support to build up on the partnership being fostered with the UN so that more UN partners can come on board to strengthen the collaboration.

In her welcome address, the MRU Secretary General, Amb. Mrs. Medina A. Wesseh thanked UNDP for the partnership with MRU and the good work across the sub-region. She informed the workshop that MRU has developed a new 5-Year Strategic plan, which has been validated and awaits endorsement by the Heads of State. The new Strategic Plan will serve as MRU’s working tool for the next 5 years she ended.

On behalf of the Government and people of Liberia, Mr. Dukulay welcomed participants to Liberia. He reiterated that election laws should be respected and should be given in a very simple and clear language. Mr. Dukulay officially declared the workshop open and wished participants fruitful deliberations.

The main highlights of the workshop included:

The workshop was climaxed with the signing of a memorandum of Understanding between the MRU and UNOWAS on the Framework of Cooperation.

The UNDP Resident Representative- Sierra Leone, Dr. Samuel Doe stated that signing of the MoU signaled commitment to work together towards achieving the SDGs in the context of “leaving no one behind”.

In her concluding remarks, Amb. Mrs. Wesseh, thanked participants and added that they were very impressed by their level of commitment. She ended by stating that MRU and ECOWAS will continue to work collaboratively to foster peace and stability in the sub region

In his closing statement, the honorable Minister of Internal Affairs Liberia – Hon. Varney Sirleaf Minister commended Her Excellency the Secretary General for the collaboration with UNOWAS and other institutions to promote peace in the sub region. Promoting decentralization is one move the government has pursued in Liberia to maintain peace and stability in the region. Cross border issues should be addressed to contribute to tranquility in the region he added. He thanked all dignitaries present and on behalf of the government of Liberia and declared workshop closed.