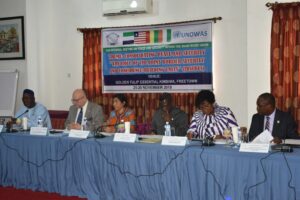 The Mano River Union (MRU), in partnership with the United Nations Office in West Africa and the Sahel (UNOWAS), has ended a two-day high powered sub-regional security conference in Freetown, amidst calls for collaboration among member states.

The conference, which was held on the theme the role of the Joint Border Security and Confidence Building Security Units (JBSCBUs), brought together representatives from MRU member states, civil society organizations, international partners, government and non-governmental agencies, as well as the United Nations.

In his opening statement, Chief Minister Professor David Francis noted that the JBSCBUs was very important to Sierra Leone and the sub-region, citing the growing threats posed by terrorist activities.

“As a government, we hope that through this initiative, the MRU member states will be alert to the emergence and effects of foreign terrorist fighters from the Sahel and West Africa regions,” he said.

He added that Sierra Leone looked forward to the outcome of the meeting and to work with and develop a proactive and effective policy initiative to strengthen border security and prevents the movement of foreign terrorist fighters and their ideologies across the borders.

Prof. Francis noted that he was aware of the challenges the MRU faced in maintaining a secure maritime, land and air boarders within its member states. This, he said, required adequate financial and human resources, equipment and specialist skills, effective cooperation and collaboration amongst the security agencies and most importantly, sustained high-level political will from the leadership of the countries in the region.

“In this regards, I wish to remind our respective governments to fulfill our commitments to MRU Secretariat and support to the 38 Joint Border Security & Confidence Building Units so that they can be effective and relevant in conflict prevention and early warning systems within the MRU states,” he said.

Minister of Internal Affairs, Edward Soluku, in his statement explained that since 2009 UNOWAS intensified cooperation with the MRU with a focus on peace and security related initiatives to stabilize the sub-region that had been challenged by the porous nature of its borders, which was undesirably facilitating unhindered movement of armed and criminal groups.

“In order to improve the functionality of the Joint Border Security and Confidence Building Units, emphases must be placed on the importance of robust policy on border management at the national and sub-regional levels, continued capacity enhancement of law enforcement agencies and their allied institutions in member states, the involvement of border communities in border management processes since they are a haven for all kinds of criminal activities,” he stated.

Ruby Sandhu-Rojon, Deputy Special Representative of UNOWAS, told the meeting that the UN agency was not only required by the UN Security Council in their resolutions to work with the MRU but that they were also equally conscious of the added value it would bring to the collective efforts to prevent conflict and sustain peace in the region in general and the MRU in particular in line with the principles of complementarity and subsidiarity.

“This is a relationship which we must nurture, invest in and sustain through joint strategic and operational approaches towards the realization of mutually agreed goals. It is in this regard that since 2009, UNOWAS has been intensifying cooperation with the MRU in close collaboration with other UN entities, with focus on peace and security,” she stated.

Ms Ruby noted that MRU countries were blessed with abundant natural resources and had been taking concrete steps to promote and consolidate peace and stability in the region. She however said the region encountered and continues to grapple with a number of important threats to its peace and stability, most of which have a cross border dimension.

“These cross boarder threats constitute a direct security menace to both the MRU and to the wider West African region, thus providing a compelling reason for us to take all necessary steps in addressing them,” she said.

Madena A. Wesseh, Secretary General of MRU, noted in her statement that conversations around the scope of peace, security and regional stability were broadening and that they embodied real life test that the people faced every day.

“It [security] is no longer confined to the proliferation of small arms and light weapons as our region witnessed in the past decades, but includes many other issues before us as a global community,” she said.

“Today, we see and feel those enormous challenges such as climate change, migration, terrorism, cyber-crimes, pestilence, pre and post-election violence and the new wave of popular citizen up-rising, just to name a few,” she

added, noting that as the challenges expand, the need to find solutions must also be established.

“The fact remains that we as a region should not limit ourselves to having only two choices, a choice of acting in concert with each other in our neighborhood or a choice of acting alone in our own self-interest. We must be each other’s keepers. We must also acknowledge [that] the world and in particular the United Nations has invested heavily to bring peace to our region and we must do all to build and secure the peace and be proud members of the Comity of Nations,” she said.