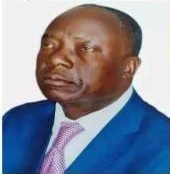 It is with heavy heart that H.E. Mrs. Medina A. Wesseh Esq, Secretary General of the Mano River Union (MRU) announces the demise of Colonel Sessegnon Tale Jean. The death occurred on March 24, 2020 at the Polyclinique Internationale Sainte Anne Marie (PISAM), Cocody, Abidjan, Côte d’Ivoire. Mr. Sessegnon was a former member of the Peace and Security Unit of the Mano River Union from 2016 to 2018.

Who is Colonel Sessegnon?

Born on October 18, 1954 in Côte d’Ivoire, Mr. Sessegnon Tale Jean was Colonel of Customs, Chief Administrator of Financial Services. He had a very successful career in the Ivorian Custom administration where he held high positions. He joined the MRU in June 2016, as senior customs officer in the Peace and Security Unit (PSU). During his time at the Secretariat, he worked closely with colleagues in the PSU and was loved by all staff in the Secretariat. He was a team player and very respectful. For many, he was the Dean, the “Big Brother”, and the man who most of the staff consulted when faced with challenging situations

He was highly professional in the performance of his duties. He was honest, God fearing, patient and always report for duty on time. These qualities enabled him to serve with selfless dedication, especially within the PSU and interacted amicably with his colleagues. He also played a pivotal part in the establishment of the Joint Border Peace and Security Units, a flagship programme of the MRU.

Colonel Sessegnon TALE JEAN’s interaction with partners and governments of Member States of the MRU was commendable. As head of a multidisciplinary team, he supervised the presidential elections in Liberia and Sierra Leone., on behalf of the Secretariat,

The shock and emotion caused by his death still lingers on the minds of staff of the Mano River Union Secretariat. Though Mr. Sessegnon is no more, staff of the MRU will continue to remember the great man.