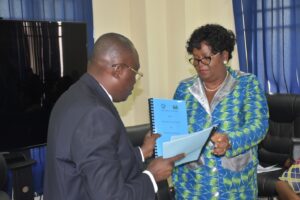 On Wednesday February 13, 2020, the Government of Sierra Leone represented by Minister of Finance of the Republic and the Mano River Union Secretariat represented by the Secretary General, signed a Memorandum of Understanding for the Post-Ebola Recovery Social Investment Fund Project (PERSIF); witnessed by Representatives from the AfDB and the Minister of Social Affairs of Sierra Leone.

The sub-regional project which is funded by the African Development Bank, with a total amount of 12.4 Million US Dollars. The project will be implemented by Sierra Leone and Guinea with a view to support the socio-economic recovery of the Ebola affected communities, with focus on Women, Girls, Orphans and Vulnerable Children (OVCs), through the establishment and day to day operation of a social Investment Fund at both the regional and country levels as well as restore basic social services and the revival of local economic opportunities.

This project was to be implemented immediately after the Ebola outbreak in 2016 but was delayed due to some technical difficulties.

In her opening remarks, Madam Baindu Dassama -Kamara, Minister of Social Welfare, expressed delight at the reactivation of the project. She stated that, the signing of the MoU signals the readiness of the teams to go into action adding that the Project Coordinating Unit has already been created.  She concluded by saying “we hope that this project will not only start, it will run for the well-being of our populations who were heavily affected by EBOLA “.

The Country Programme Specialist from the AfDB, Ms. Felicitas Atanga thanked the Government of Sierra Leone for facilitating the signing of the MoU, stating that this was one of the conditions for disbursement. She encouraged the Minister of Finance to nominate the Chair of the Steering Committee for funds to be released according to h Project Implementation Plan.

Amb. Mrs. Medina A. Wesseh, Secretary General of the Mano River Union, expressed satisfaction on getting to the highpoint of signing this MoU. She stated that she was grateful that the project is back on track and with clearly defined roles and responsibilities. She explained that two of the MRU Member States: Sierra Leone and Guinea will be implementing this project, whilst the MRU Secretariat will coordinate and monitor its implementation. The Secretary General ended by affirming the commitment of the MRU to work with all stake holders to make this project a success.

The Hon. Minister of Finance, Mr. Jacob Jusu SAFFA, thanked the African Development Bank for reactivating this project and also thanked the MRU and the Ministry of Social Welfare for their coordination roles. He emphasized that the money is not for AfDB or MRU but for the citizens of Sierra Leone. He admonished that the money must be judiciously used for its intended purpose. He encouraged the implementing agencies to adhere to the rules and regulations of the Bank. He stressed that “No change must be made to the project without engaging the AfDB through the Ministry of Finance”.

The occasion was climaxed with the signing of the Memorandum of Understanding by the Hon. Minister of Finance and Secretary General of the MRU