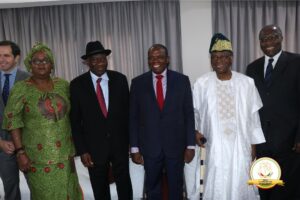 Conakry, Guinea – The Joint National Democratic Institute (NDI) and Kofi Annan Foundation (KAF) international delegation has released its preliminary findings from the pre-election assessment mission conducted between December 9-13 in Conakry, Guinea, based on extensive meetings with a wide range of stakeholders.

The delegation’s primary goals were to demonstrate international support for Guinea’s electoral process, assess the political and electoral environment ahead of the February 2020 legislative elections, and offer recommendations based on the preliminary findings to enhance citizen confidence and mitigate the risk of electoral violence.

“The upcoming parliamentary elections will be a litmus test of Guinea’s democratic progress and preparedness for the presidential elections later in the year,” opined H.E.  Nicéphore Soglo. “Such progress will be dependent on the country’s ability to strengthen the legitimacy of its institutions and the rule of law.”

Through the assessment period, the delegation met with H.E. President Alpha Condé; Hon. Speaker Claude Kory Kondiano and members of the National Assembly leadership; Prime Minister Ibrahima Kassory Fofana; the Chairman and members of the Independent National Electoral Commission (Commission Electorale Nationale Indépendante – CENI); leaders of majority and opposition political parties; leaders of civil society organizations; members of the press; the National Contact Group (Groupe National de Contact); religious leaders  including the Imam of Conakry’s Grand Mosque and a representative of the Archbishop of Conakry; and representatives of the diplomatic community and international partners based in Conakry.

Many Guineans with whom the delegation met expressed concerns around speculations about changes to the country’s constitutional framework and readiness for the February 2020 legislative elections. The rising restiveness in the country, especially during political demonstrations since October, which resulted in the loss of life is another source of anxiety as the country heads into a major election year. Other areas requiring attention identified by the delegation included the credibility of the voter registry, expectations of the election administration, electoral dispute resolution, and gender representation.

However, in spite of the outlined concerns, the delegation noted that dialogue between the ruling and opposition parties had rekindled the efforts of the 2016 Guinean Political Accord, an important step forward ahead of the elections.

Commenting on the pre-election environment, H.E. Goodluck Jonathan said, “Despite visible challenges, it is evident that the citizens of Guinea are not deterred. Many Guinean civil society organizations are undertaking initiatives to strengthen their involvement in the 2020 electoral process. The delegation noted that all Guineans with whom it met expressed a strong desire for peaceful, inclusive and credible elections in 2020.”

The NDI-KAF mission conducted its activities in accordance with Guinean law and the Declaration of Principles for International Election Observation.